The British are Coming

The paperback edition of the New York Times bestseller that the Wall Street Journal said was “chock full of momentous events and larger-than-life characters.”

Rick Atkinson, author of the Pulitzer Prize–winning An Army at Dawn and two other superb books about World War II, has long been admired for his deeply researched, stunningly vivid narrative histories. Now he turns his attention to a new war, and in the initial volume of the Revolution Trilogy he recounts the first twenty-one months of America’s violent war for independence.

From the battles at Lexington and Concord in spring 1775 to those at Trenton and Princeton in winter 1777, American militiamen and then the ragged Continental Army take on the world’s most formidable fighting force. It is a gripping saga alive with astonishing characters: Henry Knox, the former bookseller with an uncanny understanding of artillery; Nathanael Greene, the blue-eyed bumpkin who becomes a brilliant battle captain; Benjamin Franklin, the self-made man who proves to be the wiliest of diplomats; George Washington, the commander in chief who learns the difficult art of leadership when the war seems all but lost. The story is also told from the British perspective, making the mortal conflict between the redcoats and the rebels all the more compelling.

Full of riveting details and untold stories, The British Are Coming is a tale of heroes and knaves, of sacrifice and blunder, of redemption and profound suffering. Rick Atkinson has given stirring new life to the first act of our country’s creation drama.

Reviews for The British Are Coming

“To say that Atkinson can tell a story is like saying Sinatra can sing…. Historians of the American Revolution take note. Atkinson is coming. He brings with him a Tolstoyan view of war; that is, he presumes war can be understood only by recovering the experience of ordinary men and women caught in the crucible of orchestrated violence beyond their control or comprehension…. It is as if Ken Burns somehow gained access to a time machine, traveled back to the Revolutionary era, then captured historical scenes on film as they were happening…. The story he tells is designed to rescue the American Revolution from the sentimental stereotypes and bring it to life as an ugly, savage, often barbaric war…. A powerful new voice has been added to the dialogue about our origins as a people and a nation. It is difficult to imagine any reader putting this beguiling book down without a smile and a tear.”

“Mr. Atkinson’s book…is chock full of momentous events and larger-than-life characters. Perfect material for a storyteller as masterly as Mr. Atkinson…. Mr. Atkinson commands great powers of description…. On center stage are the battlefields, [which] are documented in stellar prose and 24 exquisite maps.… The narrative is the stuff of novels, [but] Mr. Atkinson’s facts are drawn from a wealth of manuscript and printed sources. He quotes aptly and with acumen…. Mr. Atkinson weaves it all together seamlessly, bringing us with him. Pithy character sketches—reminiscent of 18th-century historians David Hume and Edward Gibbon, both of whom Mr. Atkinson cites—bring the dead to life.”

“Atkinson…wastes no time reminding us of his considerable narrative talents…. His knowledge of military affairs shines in his reading of the sources…. For sheer dramatic intensity, swinging from the American catastrophes at Quebec and Fort Washington to the resounding and surprising successes at Trenton and Princeton, all told in a way equally deeply informed about British planning and responses, there are few better places to turn.”

Read more reviews of The British Are Coming 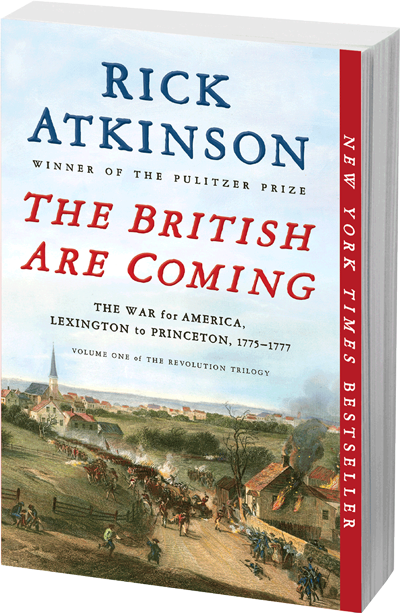 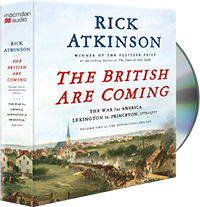